The following post is a multi part series written by Doug K7EME and his quest to get on 1296 EME.  Part 1 of the story is below.

Several years ago I began wondering what EME on bands other than 2 meters was like. I knew that 1296 MHz EME was the second most popular band next to 144 MHz. I also heard that with a moderately equipped station I would be able to use more traditional modes like CW and even occasionally SSB! Digital JT65c is still the primary mode, but the possibility of hearing the echo of my own whistle returning from the moon after 2.5 seconds had me hooked.

I knew the basics of a moon bounce station from my work on 2 meters. But doing the same thing on a microwave band takes a whole new level of effort. So for starters I decided to put a terrestrial 1296 station together. There was a group of hams that got together every Wednesday night and sometimes on Sundays, on the 1296.100 calling frequency. I bought a 10 watt module for my Icom 9100 for 1296, ordered a 45 element loop yagi and receive preamp, some coax, and gave it a shot.
Much to my surprise I could talk to most everyone in the group!

Over the next year I learned about the propagation, upgraded to a 140W amplifier, and added a larger antenna. One day I worked KK6MC/R during the ARRL June VHF+ contest in El Paso, Texas! Duffy was just running 10 watts and we were on CW. I was hooked even more! I eventually built a W6PQL 600 watt amplifier and learned the hard way how NOT to use sequencers to protect preamps from that kind of power. (Editorial note: here is the right way, care of K5QE)
One day I was given a 10ft wide TVRO dish that was in sad shape. It had been dropped and 5 of the 16 ribs were bent out of alignment. But it was FREE! So it was time to start reading everything I could find on dishes and their feed systems. Fortunately for me, one of the hams in that 1296 group is Barry, VE4MA, one of the world’s leading authorities on feedhorn design for many types of dishes. Barry has endured my endless questions, kindly answering even the dumb ones. Thanks!!

I had to completely disassemble that dish and figure out where to begin. Some of the mesh panels were torn beyond repair. But the 11 unbent ribs gave me a guide to reshape the others. After an afternoon of careful work I was pretty sure the dish would be round again. I reassembled the frame and it looked good. Having a dish is great, but it is so much more involved making it point at the moon, and KEEPING it aimed at the moon. The TVRO dishes are used for aiming at a specific line of TV satellites in Geo-stationary orbits. A simple aiming device is all they need. To follow the moon, you need to be able to move the dish in ever changing arcs across the sky. Also, the tracking has to be more and more accurate,
the higher you go in frequency. Plus the wind load of these dishes is much higher than an array of four 2 meter beams. Lots to consider.

I never could find pictures of a dish mount similar to mine that had been converted for the full azimuth/elevation control I needed. After a few months of mulling it over while working on other antenna projects, I took the existing mount completely apart and discovered that, with one welding job, I could make it work with what I had on hand.

My father-in-law did the weld job for me and soon I was able to put the mount together with the two motors for tilting and rotating the dish. 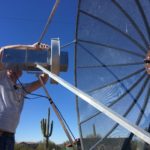 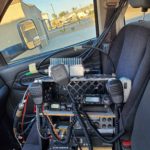 One of the N1AV “KISS crates” for rovers 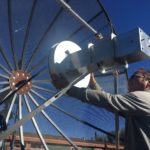 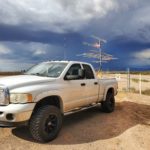 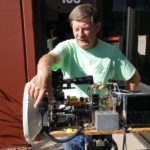